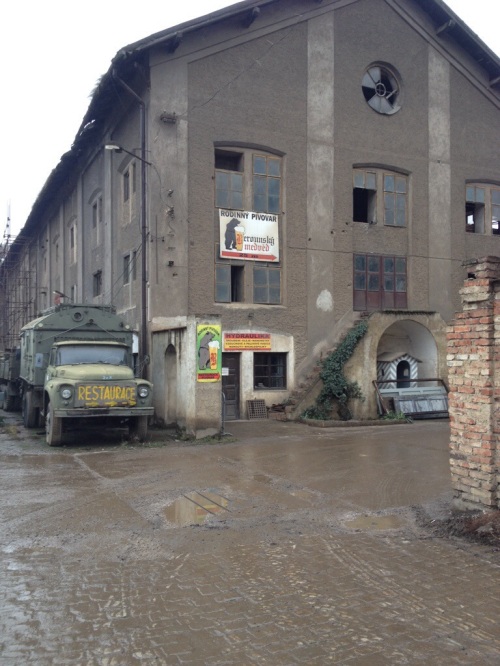 “Find the hole in the fence at the Beroun train station, go through it and then cross the scrap yard…”

These are the instructions I was given to find Pivovar Berounský medvěd, a brewpub a bit outside of Prague. I had concerns. I envisioned myself getting arrested and trying to explain that I was looking for beer. And then making the call from jail… the fantasy got a little crazy.

But it need not. Of all the many train-stop pub visits I made outside of Prague, this was one of two that I would recommend. My favorite beer here is a smashing session beer called “Cyclopivo” meant for cyclists passing though. Apparently not everyone climbs through the fence off the train.

Get back on that same train heading away from Prague to arrive at Olomouc (pronounced ola-moosh) for some more fantastic beers and delicious food at Svatováclavský Pivovar. Although we didn’t try it, it also has a beer spa and a hotel. Everything you need in one place!

Olomuoc is a charming town in a way that I had expected Prague to be. Public sculptures (I like to call the one below “Asparagus on Turtle”) and several museums dot the brief walk to the brewery from the train station. I could have happily stayed for the rest of the week.

The best brewpub in Olomuoc is tricky to find because the entrance is inside an office building, but once inside you’ll see this door: 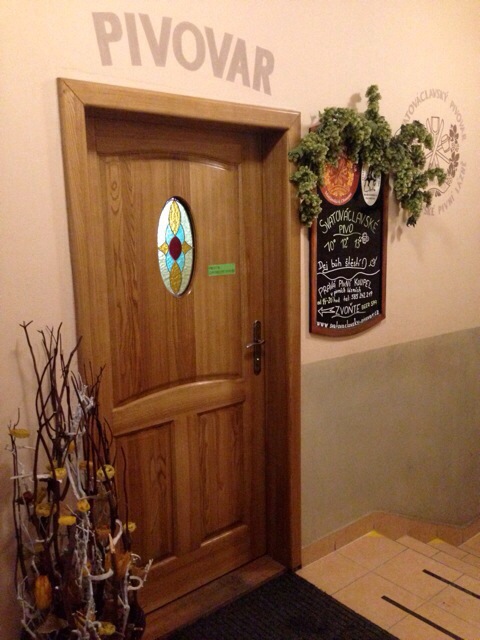 Not only were the beers well made and tasty- particularly the tmavé pivo and the wit-like nabidky- but the meal was the second best of the trip. They smoke in-house, and the smoked platter had three distinct smoked meats. Each one alone would have made the journey worth it. Together we were knocked out! I had tongue with dumplings and horseradish- so good it left my chef-companion dreaming up recipes for his pub.

And the other day trip from Prague? I lucked into a 30 hour layover in Dublin thanks to Aer Lingus’ odd connections from Boston. I lined up my craft beer ducks, and got as much in as I could with the help of local Liam O’Hara and my dear Irish/Boston pal Bronagh. We made three stops.

The first (after some bottled craft stout at Liam’s by 8 Degrees and Dungarvan) was Bull & Castle, which has separate rooms for eating and drinking. The upstairs “beer area” overlooks Christ Church- great for a first time visitor like me. They also offered 8 Degrees, on cask! And a fine IPA from Trouble Brewing of Kildare.

The next stop was for food, but I was thrilled to see Spanish craft beer Estrella Damm offered at Fade St. Social. It’s the perfect delicate yet spicy beer to accompany the funky menu of fried chicken popcorn, truffled duck mousse, and shaved octopus. And crab toasties. And… we ate a lot.

The final stop was P Mac’s, where we finished with Trouble Brewing’s Dark Arts Porter. I would make every stop again- it was the perfect Dublin layover. Try it the next time you go to Prague!