Over local beers at Bricks on the Greek island of Crete, renegade former financial risk analyst turned craft beer bar owner Kostas Aloupis talks about waking up to beer in Belgium, having his bar singled out and shut down by Amstel, and his theory of good service.

If you look at the shape of Greece on a map, you will see a big hunk of land on the left and bits that seem to be breaking off on the right- islands. It’s like a snapshot of something wet being taken from a bowl by a giant hand moving west. The bowl is Crete.

When I asked him for an interview, Kostas said, “Sure- I’m here all day” meaning- we are not meeting anywhere other than his bar and he will be working. I am early for our chat, so I order a bottled beer made in the next town over by Lafkas Brewery called White Mountains- a “Triple Hop Pale Ale” that I had enjoyed here the night before. When I first saw it, I thought, “why are they naming a beer after New Hampshire mountains in Greece?” Forgive me; it was an American moment. (I later explored Crete’s “Lefka Ori” and their stunning views. No one would confuse them with New Hampshire.) 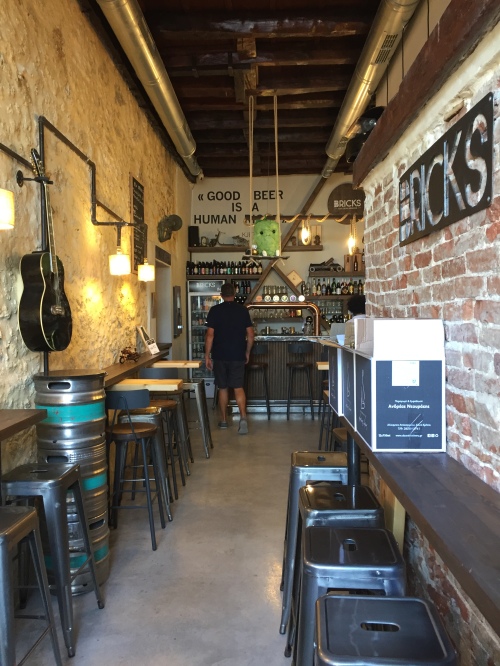 Squeezed between other businesses on the northern side of Crete in the harbor town of Rethymno, Bricks is a high-ceilinged hallway lined with stools, a row of five taps and a short bar at the end, and a couple of beer fridges. Outside is a glass-walled square surrounding tables between similar patios lined up as far as one can see up and down the row of other bars and eateries. Much like the boardwalk of any beach town, only classier in that European “we always drink outdoors” way. 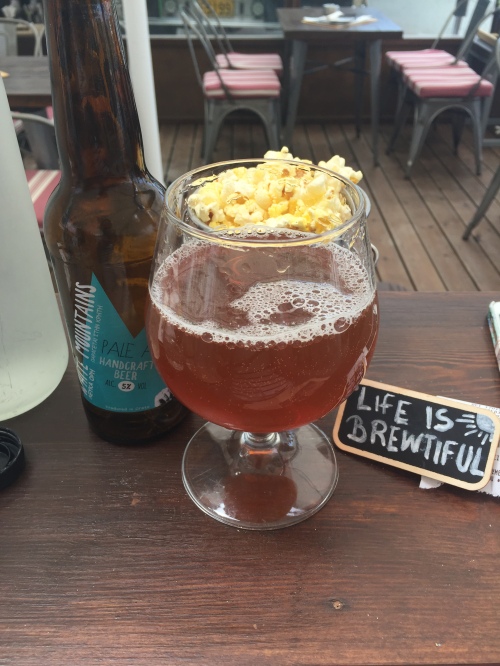 NOT named for the White Mountains of New Hampshire

I pick a table outside for our talk and settle into the chair facing the water; I assume that Kostas will want to keep one eye on his bar while we’re talking. It is May, so still fairly cool, flowers bursting open everywhere, no bugs, and few tourists compared to the summer months. I send a silent “thank you” to my friend Chip whose milestone birthday is the main purpose of my trip- or more accurately to his parents for getting busy in August of 1967.

Kostas arrives right on time and before my beer. Dressed in a black polo shirt and black shorts, he is deceptively casual. He selects a beer for himself which he describes as a good breakfast beer. It is 11:00am.

In earnest curiosity, he asks why I want the particular beer I ordered, and explains why he chose the beer he did. When the beers arrive he speaks to the server in Greek, and translates for me that he has ordered a snack. His bar does not serve food and he does not ask me what I’d like. The server knows to order from next door. It turns out to be fresh, cool sandwiches made with local salami, peppers, and cheese.

Originally from Athens, with a finance career in Switzerland, France, and Germany behind him- Kostas declares that he moved to Crete for love. This direct sincerity is his style. During his years of finance work in Europe, he visited Belgium and, as happens, the beer changed his life- another love to follow.

“Beer was my hobby.” I ask if that means he was ever a homebrewer. He laughs- “No, my hobby was drinking beer.”

Kostas! (sorry about the closed eyes)

Kostas is my height (meaning tall for a woman and on the shorter side for a man) agreeably and evenly stout, always smiling, and sharper than you first realize. He may look you directly in the eye and respond as if he hasn’t been thinking of anything else- but he is acutely aware of everything going on around him. To the point that he will jump up without warning and leave the table- only to wave and smile when almost out of earshot to say he’ll be right back. To move his car, to talk to a customer, to check on the overdue progress of the noisy construction next door, to take delivery of something- he moves. A lot.

One end of the Rethymno Harbor

Kostas’ first (and ongoing) business on Crete was a travel and excursion outlet meant for tourists. Scuba diving, car rental, cooking classes- that kind of the thing. Over beers with his business partner, Kjetil Jikiun (the Norwegian craft beer force behind Nøgne Ø, 9 MTA in Tblisi, Georgia, and Cretan brewery Σόλο (pronounced Solo), to name a few) while facing the dilapidated space available next door to the travel front- and the idea of Bricks was born. (Not to be confused with “Brinks”- which Kostas tells me was once a Greek craft brewery but has since been purchased by a macro.) “They always say the quality will not go down, but of course when profit is the motive it is inevitable that cheaper ingredients will eventually replace the higher quality ones.” Indeed.

In addition to Cretan craft, Bricks carries a couple of BrewDog and Stone offerings (likely a Jikiun connection) and some Belgian options. Unless I switched to drinking the glorious local white wines, I could not find other quality beer drinking establishments. I was here daily; sometimes twice a day.

The Σόλο (Solo) beers on tap at Bricks

I recognized Kjetil’s name on the list of judges at the most recent World Beer Cup in Nashville. The Solo beers on tap at Bricks are aimed at the hop-head market. Even the saison. Usually when I see a bunch of hoppy beers on offer, no matter where I am, I prepare my taste buds to gag while I try all of them to find a good one- if there is one. All of the Solos beers were not just good, but seemed to be carefully made to be easily distinguished from each other and to allow certain aspects to shine without mucking them up with faddy extras. (Read: strong malt sweetness AND slap-your-face-hops AND aged in a whiskey AND wine barrels- oh- and Brett! Guava, pineapple, chili pepper too. Ick!) It was also refreshing that each server had a different favorite, and could explain why in helpful, non-judgmental beer speak.

As our sandwiches arrive, Kostas orders us more beers. I tell him how much I like everyone I’ve met on his staff, and he asserts something he has clearly put a lot of thought into: “People who sell craft beer must pass the feeling.”

The excellent servers at Bricks

The service at his bar is in sharp contrast to that of other places in Greece, where servers have no expressions, seem slightly worried, and are face-down in the devices on which they take orders. At least when one writes by hand, one can flick up the eyes every now and then to connect with guests. But when tapping into a machine, the demeanor is so cold the customer might as well type it into the flat screen herself. (Have you been to the Philadelphia airport lately? Gah!)

I will add though: Americans, chill out. Servers in Greece are not trying to turn tables for the highest check possible in the shortest amount of time in pursuit of big tips. Here and elsewhere in this country- you will get your beer, your check, your whatever- eventually. Enjoy the view, the company, and take a deep breath. (Frankly, it took me a few days to adjust to Greek Time myself. But now I miss it.)

Bricks offers tasting panels of all their draft beers

Doing business in Greece has its own set of special barriers. Kostas described an incident last February at a time when the third largest annual carnival in all of Greece took place and the stretch of beach-front businesses was wall-to-wall people for three days. Normally bars are not allowed to serve draft beer on the street- but those rules are “handshake” suspended for this event. Unless the sponsor is a macro brewery and you’re the one and only craft beer bar on the strip. Kostas says that on the first day of the event, he got a visit from 12 government officials who closed his bar down for the duration of the carnival for violating the proscription against serving beer outside- while every bar as far as he could see to the right and left was openly doing just that.

But pointing out the obvious injustice to the authorities is not how things are done in Greece. Of course, he says, he would never call out his neighbor businesses. (Technically, they were all violating the ordinance.) But he knew it wasn’t any of his neighbors complaining. He confirmed later that the pressure to shut his bar down came from… Amstel. (Owned by Heineken International, which recently lost a multi-million Euro appeal for significant unfair practices in Greece.)

Kostas had other stories involving death threats and bullying. Suffice it to say that it’s not easy, especially if you do not know the myriad unwritten rules to run a bar in Greece. “In Greece, it’s important to be present when you own a business.” He may open another beer bar in Chania (pronounced “han-ya”) and maybe Heraklion (a center for coming and going, with an airport and major ferry terminal) too. But he says that would be the most, because – as they are clustered on the northern coast – he can get to all three in a single day without difficulty.

Back of the bar

At his core Kostas is a business man. And even though he says that he could not make a living if a beer bar were all he had, it is clearly his passion. He is intently curious about the other Greek breweries I have already and will soon visit; he copies my notes about Athens, he asks what I know about the Paris beer scene, as his sister is a judge there and he visits often, and he wants me to report back after visiting and tasting the beers at Santorini Brewing Company. He makes a call to get me an appointment, which I did not think I needed but accepted his help. Later that week, when I arrived at the scheduled time, the person I was to meet did not know I was coming- because the brewer who spoke to Kostas forgot to tell her! But his call got me a revealing conversation I would not otherwise have had.

Proving that in Greece, it truly helps to know a Greek.

A stuffed hop made for Bricks by a fan